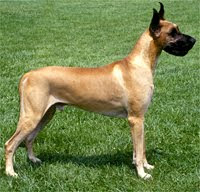 
Dubbed the "Apollo of Dogs," the Great Dane is probably the product of two other magnificent breeds, the old English mastiff and the Irish wolfhound. Its ancestors were used as war dogs and hunting dogs; thus, its ability as a fearless big-game hunter seemed only natural. By the 14th century, these dogs were proving themselves as able hunters in Germany, combining speed, stamina, strength and courage in order to bring down the tough wild boar. The noble dogs became popular with the landed gentry not only because of their hunting ability but also because of their imposing yet graceful appearance. They made gracious additions to any estate. British people familiar with the breed first referred to Great Danes as German boarhounds. Exactly when and why the breed was later dubbed the Great Dane is a mystery because, although undeniably great, it is not Danish. It is a German breed, and in 1880 German authorities declared that the dog should only be referred to as the Deutsche dogge, the name by which it still goes in Germany. The English paid no heed, and the old name stuck for the English-speaking world. By the late 1800s, the Great Dane had come to America. It quickly attracted attention, as it does to this very day. The breed has since achieved great popularity in spite of some of the difficulties that owning a giant dog entails.

The Great Dane is gentle, loving, easygoing and sensitive. It is generally good with children (although its friendly overtures may overwhelm a small child) and usually friendly toward other dogs and pets. It is powerful but sensitive and responsive to training. It makes a pleasant, well-mannered family companion.


The Great Dane needs daily moderate exercise. Its needs can be met with a good walk or romp. Despite its sturdy appearance, it is not well-suited to living outdoors and is best suited to dividing its time between indoors and out. Inside, it needs soft bedding and sufficient room to stretch out when sleeping. Some tend to drool. Coat care is minimal.


This regal breed combines great size and power with elegance. It is square-proportioned and well-balanced. Its gait is strong and powerful with long, easy strides. These attributes are necessary in a dog required to overtake and then over-power relatively swift but formidable quarry. Its coat is short, thick and glossy. The Great Dane is most noteworthy for its majestic carriage and appearance — the "Apollo of Dogs."


Article on the Cost of Destruction: (Link to Source)

~ First before you read the below I have to say I own a Great Dane and a Chihuahua so I will be able to tell you first hand my costs. But to this day I have not spent ONE PENNY on Teagan, our Chi, due to any destruction in our house or any others home. To date Nova has chewed one doggy poo bag holder worth $4.99 and that was only because we were driving a 9.5 hour trip when she was 12 weeks old and I couldnt see what she was doing. There are, of course, understandable mistakes like tails knocking things over or danes running into walls or doors but I think that some of the people who do spend this kind of money just for destruction need to look at their training techniques and need to report this when these polls are being done! So this is why I am posting this. I think it is a little out of line!
"The average Great Dane cost its owners $1200.00 over its lifetime in stained carpets, wrecked furniture and chewed cables, while chihuahuas notch up an impressive $1300.00 dollars worth of damage.
Mastiffs came third, costing their owners $1100.00 over a lifetime while Basset Hounds were found to cause $1100.00 of damage on average. Finishing off the top five is the Whippet, which will leave a trail of destruction totaling $1000.00. Other dogs with wrecking tendencies include English Setters, Bulldogs, Dachshunds and Boxers.
Among horror stories that emerged in the study was one about a Great Dane who thought the patio doors he was hurtling towards were open and knocked them straight out of the wall. Another owner told how his Border Collie’s wagging tail knocked over a large glass of red wine onto a cream carpet, two days after it had been laid at a cost of $6000.00.
Mike Pickard, Head of Risk and Underwriting at esure pet insurance, said a dog’s destructive tendencies comes down to boredom. “To help minimize your dog’s destructive behavior, remember to house train them from a very early age, maintain their health with regular vet check-ups, and give them plenty of exercise,” he said.
How much money has your dog cost you in damages?"